The Pressing Need for an American Nuremberg 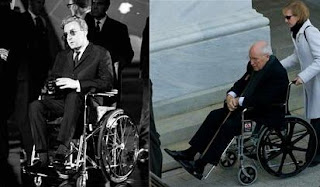 ~Robert Jackson, chief U.S. prosecutor at Nuremberg
Forget about the economy...for now. Forget about the environment...for now. Forget about every pressing issue that has resulted from 8 years of disastrous policies. The single most important item on the agenda of the incoming administration is the prosecution of members of the current administration for torture and other war crimes. This must be at the very top of the list. Nothing takes precedence over this country declaring it is a civilized nation that does not allow its leaders to initiate wars of aggression or to torture prisoners. The invasion and occupation of Iraq, based on "faulty intelligence" was a con game that had the explicit support of many Republicans and the implicit support of many Democrats. The international community and most people in this country are well aware that this is an international crime, perhaps the worst since the United States involvement in Southeast Asia. In additions to the thousands of deaths and injuries that have resulted from the invasion and occupation of Iraq, the United States has been torturing prisoners and subjecting others to rendition to other countries that have tortured them. If we let those guilty of these crimes go unpunished we not only set a dangerous and unnacceptable precedent for the future, but have also permanently decreased our international standing as a country interested in the most basic form of justice.

There is very important history to be made in the next few months. We must demand our leaders to be wise and brave enough to forge ahead in what is right and just. We must demand those guilty of torture and war cimes be prosecuted.

Go to this link and demand that the incoming administration prosecutes those responsible for the war of aggression against Iraq and for the torture of prisoners. We must restore some sense of morality as a nation before we can do anything else.
Posted by Ernesto Del Mundo at 7:29 PM No comments: