My official declaration of war, made just moments ago:

From my base camp in America, before it's too late, I announce with solemn heart, weary mind and indomitable spirit, that I do hereby declare a state of war with the place in the human mind known as Dumbfuckistan. This decision is neither made lightly, nor in haste. Indeed, this state of affairs has been building for eight long years now, and that slow percolation only recently resulted in the pressure needed to set off an all out explosion, a desparate need for action. It is indeed a desparate state of affairs that the country is on the precipice of renouncing even it's lofty words of attempting to be interested in equality of opportunity. So we have come to this; religion used as a blunt instrument of force to secure a future for well to do Republicans. Identity politics used to divide and conquer a low income, low information lower class programmed to think in Balkanized terms of self-disenfranchisement. I am thus consumed with a righteous hatred. No, I don't hate the average Dumbfuckistani, who is for the most part a passive, grazing creature, sometimes even amiable, but nonetheless more dangerous in its ignorance than any other beast on the Plains or in the mountain forests. My hatred is reserved for the state of mind fog that the Dumbfuckistani remains in, even after being painfully raped and violently mugged for nearly a decade. It is this that must be eradicated, and given no quarter. For desparate times require desparate actions, and I must take up mental and moral arms against the virulent corruption, environmental destruction, torture, state terror, perverted Christianity, bald-faced lies, incompetence due to cronyism, war profiteering, etc., etc.,that the Dumbfuckistanis have allowed to fester for 8 years too long. This is war, a total war, an all-consuming war. It is war that has been fought before in this country. It is a war recognized by the Founders as altogether necessary when times require. Now is one of those times, and I am confident in the victory...of good over evil!

What Would YOU Do

I see a message from the government, like every day
I watch it, and listen, and call 'em all suckas'
They warnin' me about Osama or whatever
Picture me buyin' this scam I said "never"

Now ask yourself who's the people with the most to gain (Bush)
'fore 911 motherfuckas couldn't stand his name (Bush)
Now even niggas wavin' flags like they lost they mind
Everybody got opinions but don't know the time
'Cause Amerikkka's been took - it's plain to see
The oldest trick in the book is make an enemy
A phony evil so the government can do its dirt
And take away ya freedom lock and load, beat and search
Ain't nothin' changed but more colored people locked in prison
These pigs still beat us, but it seem we forgettin'
But I remember 'fore September how these devils do it
Fuck Giuliani, ask Diallo how he doin'
We in the streets holla- 'jail to the thief' - follow
Fuck wavin' flags bring these dragons to they knees
Oil blood money makes these killers ride cold
Suspicious suicides people dyin' never told
It's all a part of playin' God so ya think we need 'em
While 'Bin Ashcroft' take away ya rights to freedom
Bear witness to the sickness of these dictators
Hope you understand the time brother cause it's major
So now you askin why my records always come the same
Keep it real, ain't no fillers, motherfucka blingin'
Mine eyes seen the gory of the coming of the beast
So every story every word I'm sayin' 'Fuck Peace'
See you could witness the Illuminati body count
Don't be surprised these is devils that I'm talkin' bout
You think a couple thousand lives mean shit to killers?
Nigga I swear to God we the ones - ain't no villains
Or any other word they think to demonize a country
Ain't no terror threat unless approval ratings slumpin'
So I'ma say it for the record we the ones that planned it
Ain't no other country took a part or had they hand in
It's all a way to keep ya scared so you think you need'em
Praisin' Bush while that killer take away ya freedom
How many of us got discovered but ignore the symptoms?
Niggaz talkin' loud but ain't nobody sayin' shit'
And with the 4th Amendment gone eyes are on the 1st
That's why I'm spittin' cyanide each and every verse
I see the Carlyle group and Harris Bank Accounts
I see 'em plead the 5th each and every session now
And while Reichstag burns I see the public buy it
I see the profilin see the media's compliance
War is good for business see the vicious make a savior
Hope you understand the time brother cause its major
Posted by Ernesto Del Mundo at 8:18 PM No comments: 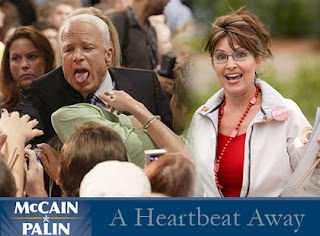 The elections of 2008 are rapidly approaching and bringing a looming sense of guarded optimism. Well they were until recently. Now they have the added bonus of comedy.
The Republican Party has finally gone totallly insane. Mind you, they are still evil and capable of scaring enough low information voters to make the 2008 elections a lot closer than they should be. But they have reached a level of desparation that is actually heartening to see. The choice of "Mooselini" to the ticket was bizarre. Until you realize that Creationists/Rapturists make up a large part of their vote. I'm not sure whether that's funny or scary. It was very scary that in 2004 this group gave us four more disastrous years. But Americans are not that stupid anymore! They won't fall for the same bullshit as they did four years ago.
I hope.
Posted by Ernesto Del Mundo at 9:35 PM 1 comment: