April is National Shooting Spree Month: Have you hugged your Assault Weapon lately? 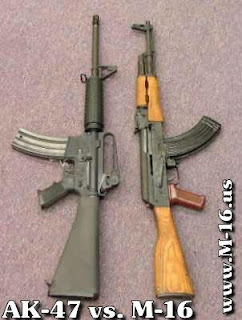 "I'm not afraid of Al Queda, I'm afraid of Al Cracka"
~ Chris Rock
Ahhh Springtime, the time of flower blossoms, birds singing...and violent, bloody, bullet-riddled rampages. Why is it that a time of year known for the renewal and promise of life is also the time most likely to result in mass murders? The sad litany of place names includes Waco, Columbine, Oklahoma City, Virginia Tech, and about a dozen more places have been added so far this month. The problem appears to be that we we have a lot of guns and a lot of crazy people, and we tend to allow that combination to occur more often than most places on earth. But it's more than just crazy people, it's a societal ill that is borne out especially harshly this year. With the economy tanking, the alienation and contradictions of a very cold system of competition is intensified. Not only has the safety net for the lowest 98 percent of the economic order been torn away in the last 30 years of bipartisan attacks on us native working schmucks, but the fallout from the loan scams have added to the ferment. Things get bleaker each Spring it seems as the greedfest of Wall Street is relied upon by our government to drive the economy. As long as that remains the case, and there is NO sign of it changing anytime soon, the Easter Bunny will need to wear kevlar.
Another scary development is the recent gun buying binge of right wing lunatics. These are the people that are genuinely afraid that Obama is a Muslim who will outlaw the Jesus-declared right to own a machine gun, and then ship them off to concentration camps where their women flowers will be pollinated by swarthy Muhammadians or some such outrage. So they stock up on ammo and semi-automatic weaponry. The good news is that statistically they are much more likely to accidentally kill themselves than purposefully kill anyone else, but the bad news is that they remain a danger to innocent family members and to you and I. If only the authors of the Second Amendment could have foreseen these nutjobs and edited the document to read:
A well regulated Militia*, being necessary to the security of a free State, the right of the people to keep and bear Arms, shall not be infringed.
* a well regulated Militia does NOT refer to some beer-swilling yahoo with his car up on blocks and an old washing machine on his front porch who wants an assault rifle because he thinks he saw a black "heldicopter" watching him!
Posted by Ernesto Del Mundo at 10:33 PM No comments: