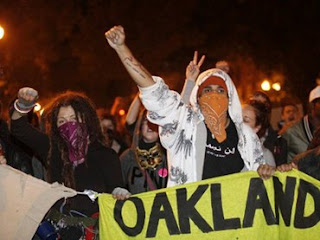 They promise them freedom, but they themselves are slaves of corruption. For whatever overcomes a person, to that he is enslaved. ~ Peter 2:19

Encouraging signs have developed in the long time since I last added an entry here. The popular movement to remove corruption from government that began in Tunisia and spread across northern Africa and the Mid-East finally washed up on these shores. Ignored, then mocked and now repressed by the lackeys of the oligarchy...we wait for a system (that has spectacularly failed to self-regulate in the recent past) to either save itself from within or face a final collapse.

All of the problems of capitalism are, of course, self-imposed. The system of competition will leave behind those less capable of fixing the rules to affect the outcome. This is no boon to society in the long run, though it may be successful for periods of time if heavily regulated. Inevitably, monopolies develop and the regulations are either gotten rid of or poorly enforced. The end result is the robbery of the many for the benefit of the few. We are at the point where the system has been too rigged for too long to be of any use for virtually anyone. Except those that own the government.

A tragic microcosm of this perverse evolution recently ended in the immolation of another supposed paragon of virtue as the big business of college football was given a chop block to its knees. State College, Pennsylvania is a small college town surrounded by farms only a few miles away on every side. In the spring and fall, the farmers spread manure on their fields and the smell wafts over the campus when there is a strong wind. That smell can't compare with the smothering, putrid stench currently hanging over that campus.

The sordid and unecessarily extended period of sexual child abuse in "Happy Valley" occurred because there was a complete breakdown of the systems of checks and balances over a period of time. This was to accomodate the whims of one Joe Paterno, and made possible by the legions of fanatical followers and the tens of millions of dollars of business they generated for the school and local area. I went to grad school there and saw firsthand the cult of personality. Penn State was the church, football the religion and Paterno the combined Pope and King. To tempt fate, his supporters erected a statue of this man while he was still living, unaware that it was built on a foundation of sand. The sand was slowly, grain by grain, falling away and marking time before the revelations of past discretions would come to light.

When the sand finally ran out, the King had just attained one final triumph. He had broken the record of Eddie Robinson of Grambling University for most college football wins in the history of the sport. Little consolation now, one would hope. Defiant, incredibly insensitive, and tone deaf to the bitter end, Paterno had to be forced out, while his brain-dead legions rioted. These incredibly dense "students" were the reason I had hoped the football team would lose every Saturday that I went there, so that the sidewalks would be relatively free from the vomit that was deposited there on nights when they won. They proudly advertised their ignorance of who the actual victims were, lost in the herd mentality that is so carefully cultivated in this country.

Which brings us to Veteran's Day. Reactionary thinkers fail to grasp what should be obvious nuances in separating wars of liberation from wars of agression. You cannot honor a warrior without cursing the sham of the war. Please don't congratulate me on my service without excoriating those who would and so blatantly have used the military for the material gain of the ruling class. To all those who served, honestly ask yourself what you served for. To those currently in the military, get home soon and in one piece and to hell with those who would make you heroes for no good cause!
Posted by Ernesto Del Mundo at 6:04 PM 4 comments: