Bring Forth the Wedge Issues! 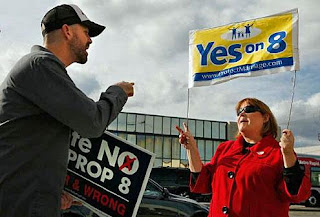 "Most voters, he had found, still voted on the basis of ethnic or cultural enmities that could be graphed, predicted and exploited."

~ 1970 New York Times article on one of the architects of Nixon's Southern Strategy, available here

Wedge issues, as always, are once again a huge part of the Republican Party's electoral campaign strategy this election year. The past two election cycles saw the crash and burn of Republican fearmongering about ruddy-complected terrorists that had been so effective in the two election cycles before that. It is clear that the economy finally emerged as the deciding issue in elections recently and people were seeing that Ronald Reagan's trickle down had turned into a seeping toxic sludge that was annihilating the middle class. Well the Republicans still don't have any answers to that problem except the same old same old, so we can expect to hear a lot more diversion being screamed through the news tickers of corporate media in the next three months. Prop 8, illegal immigrants, health care portrayed as welfare...all the old standards will be new again. Any real debate on how to revive the economy will be drowned out.

As for the Democrats, they do not have the luxury of running against a Republican Party in power, so their strategy is to make people remember how we got here. It will be difficult, since there is the growing realization that the economy will not recover any time soon and may be in permanent decline, only temporarily alleviated by short-lived speculative bubbles. They seem content to let the Republicans go on abusing archaic parliamentary procedures to obstruct any meager attempts to pull us out of the death spiral. Even without their obstructionism, there are no signs of the bold type of actions necessary, such as a radical transformation to renewable energy, and shifting priorities from the military and prison industrial complexes to education and living-wage job creation. This is where the Democrats must take the debate. We shall see how effective they will be.

It seems one seldom goes broke while exploiting the short attention span and prejudices of the U.S. electorate.
Posted by Ernesto Del Mundo at 1:11 PM 4 comments: